This is the remake of one of Konami classic: The Goonies.

This game was made by Konami in 1986. There were both a NES version and an MSX version of the game; this remake is based on the MSX Version.

SpotUP was made a port to AmigaOS4 in 2008 (in that times SDL+OpenGL combo do not works in window mode, and that was the reasson why i recompile it in 2010 again, to make it works with new SDL/GL in all the resolutions and win/fullscreen modes). Somethere in beetwen, in 2009, Hak was made port to MorphOS, and so, again only AROS lack the port of this good game (because only about year ago SDL and GL on AROS start to works fine). 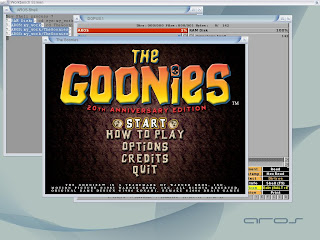 For AROS compilation was very easy, just because i re-use the port which i compile for AOS4 year ago, and all amiga-like related fixes (there was not only PROGDIR: changes, but also some code-reworking have place) was already done by SpotUP back in the past. The only parts which i fix, its makefile in terms of gcc/g++ and right stubs.

Negative note is that on Vmware game feels very-very slow (sure, that Vmware and SW mesa rendering can make differences, but still on aos4/morphos on peg2/1ghz it works very fast) and very possible that AROS realisation of SDL/GL combo can show some problems again (as in case with CadogAdventure). Cross the fingers that not, and if someone can check it on real HW with real HW acceleration, plz put a comment-note about speed. 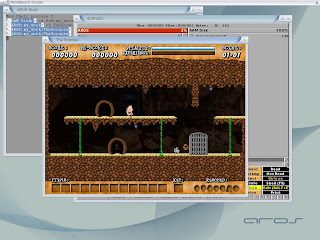