Russian diskmag for all NG amiga and like oses

Few days ago one of russian person who in interest about amiga and related stuff, release a russian diskmag called "oldgames" issue7. Diskmag works initially only on windows (there is win32 version), and while it sound strange that amiga-related mag works only on windows, amiga vesion of that was planned, but due to all the problems, and that it for first was oriented on the classics only and only for russians, all attempts die in rest somethere in beetwen and only windows version are done. 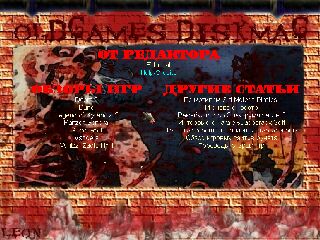 The easy way with win32 version wasn't because someone code win32 engine from scratch, but just because engine for mag use welknown and open diskmag engine called Panorama done by the Crhis Dragan. For example diskmags like Hugi, latest EuroChart, latest ShowTime and some others use that engine. And for our surprise, some time ago, Ransom from IRIS (that one who do EuroChart), get sources of engine from Crhis, and make a SDL port. At that time, it was a bit buggy in few parts, implemenation of SDL on amigaos4 was buggy like hell, not saying that AROS on that times was out of question as something totally not mature (only year ago AROS get decent SDL support). Only on Morphos it was more or less fine.


1.5 year ago, after a lot of tryes to find out Crhis and Ransom, i found both, and get from them all the necessary code, which, i just recompile for os4 with new SDL, and release a new version of  EuroChart 48, as well as few versions of latest HUGI: Hugi34 and Hugi36. Engine still a bit slow, and only on normal machines like with 800mhz and more it will be usable fine (i am sure there is a lot parts which i can change to speedup it, but that not done yet). But you can see it for yourself on the videos of hugi36 on os4 in action, on "25 years of amiga" aprty in Holland:

Not ultrafast, but still usable. I hope to speed up it radically in near future (with adding opengl stuff, profiling bad parts of sdl code and co.), but for now it works at least and can bring some fun to amiga users.


And so, few days ago one man release a russian diskamg which based on that engine, and ask "if someone will intersest to port it to amiga, let me know". And as i already have panorama port, i of course was in interest to help, even, if diskmag still only in russian (that of course the big problem for the all the amiga users, but hey, you can navigate over, and listen some good and welknown music).


The problems with which i meet , was fonts and cyrilic support. Fonts its something boring and un-interesting all the time, but at this time i dig in to found the solution. Problems lies in the code of engine (again), which just use Freetype for text parsint (so .ttf fonts), but just without meaning in mind cirilic at all. By standards all the .ttf fonts should be unicode-kind, but of course, its still possible to create some self-modified fonts, which will not follow to standart, but will still works. And so, i just follow the easy way , and except of changing a code of engine (yeah, a bit lame, but i just want to make it works fast, without waiting till engine code will be changed, adapted and tested) i just create self-made ttf fonts with necessary cp1251 codepage (the codepage #1 for russians) and with fixing of some bugs, create a working aos4 version.


But as we all know that  aos4 is not only one os in the amiga world, i trying to support in last time all the modern and popular amiga and amiga like oses (that is aos4, morphos and aros-i386), and because of that i create new version of morphos engine, and, what is most important and for sure interesting first version of egine for aros-i386 ! Of course, on aros with modern and fast hardware, you will not have any kind of slowdowns, or problems with speed. Its all will be fast and good, just like on win32 with original engine by Crhis. Should i add that for aros all what i change its only makefile and endian fixes (as it little-endian, not as os4/mos which are big-endian) and nothing more ? That show us that AROS also reach some level for now. The level, when you can easyly build some code without problems, and without jumping to aros-specific problems. Wish that someday it will be the same for all the aros parts.

Of course many of you will undestand nothing on russian, but you at least can plays with it. Keys 1,2,3,4,5 are used for swith beetwen music tracks (so even if you do not know russian, you can run it, and enjoy some music while browsing the articles and trying to understand what is all about :) ).


As for quality of diskmag itself, i think we can mark it as "middle". Not that bad to call it bad, and not as good to call it quality. Music are used in are wellknown and not done specially for, the design itself a bit "ok", but still its all a lot of effort to put all together, write articles and so on. I know that for myself from my past expirience with diskmags.